Strahler ordering analyses on canopies of a branching MAF

Branching MAFs are the key building units in marine ecosystems, including the coral reefs. Branching corals exhibit taxon-specific canopy structures and are crowned by morphometric modifications within their canopies, habitats that are under the control of biological and environmental drivers. In trees, the canopies create a wide diversity of habitats that are enclosed within either one of three major compartments, the crown, trunk, and understory, considering functional properties of the tree’s3D structures. In the same way, the spaces within MAF canopies (such as in branching corals) create ecological niches to obligate and facultative inhabiting biota that provide supporting services, including shelter, foodsupply, improved foraging, mediation of hydrodynamic stressors, and more. As result, a MAP canopy may harbor a distinct community of  organisms at any dynamic space and time dimension.

Structure complexity for branching networks within a coral canopy can be depicted mathematically by hierarchical systems. One of which is the Strahler order, a numerical measure of branching complexity which was originally introduced in hydrology for defining river stream based on a hierarchy of tributaries. In this system, ordering initiates atthe terminal branches of the branch complex and increases when two branches of equal order meet (Figure 1). While ordering techniques have already been applied decades ago for modeling the structure of terrestrial plants, and marine organisms such asbryozoans, sponges, and corals, this approach has not yet been introduced as ameasurement for coral canopy complexity, and primarily for addressing canopy-associated species.

A recent study (https://doi.org/10.3390/jmse10010121) evaluated canopy structures and their inhabiting organisms in the branching coral Stylophora pistillata, from Eilat, the Red Sea (Figure 1), by first, applying the Strahler order as ananalyzing tool of the coral canopy structure (Figure 1), and then, to measure the consideration of its significance of the dweller communities. In particular, this study tested the notion that coral colonies with ahigher Strahler number would present higher structural complexity and by doing so that produce a variety of niches, thus harboring higher biodiversity. In addition, the study characterized the major coral canopy compartments occupied by specific dweller organismsat day and night times.

A total of 32 species were identified dwelling in 114 studied S. pistillata canopies, eight of them were considered to be rare. Four taxa were identified to the family level, five to the genus, and 23 to the species name. Eleven species (34.4%) were identified as sessile species and theirtotal individual count was 618. Mobile species total individuals count was 401 at daytime surveys, and 741 during night time. Per-canopy dwelling species, numbersranged from 1 to 41 individuals. Canopy dwelling species assemblages were numerically dominated by the sessile bivalve Leiosolenuslessepsianus, recorded from 95 canopies andreaching up to 90% abundancy of total sessile species. Trapezia cymodoce (a crab)was the most dominant species among the mobile species, recorded on 104 canopies with 39% and 20% of total mobile species abundancy at day and night observations (Figure 2).

Except for the two canopy-nocturnal crustacean species Pseudoliomeraspeciosa and Trapezia rufopunctata, and the canopy-diurnal sea urchin Diademasetosum, all other mobile canopy dwelling species exhibited different day/night abundance distribution patterns, and mean richness and abundance were higher at night compared to day hours (3.24 ± 1.8,9 ± 6 for day and 4.23 ± 2.1, 11.9 ± 8.2 for night, richness and abundance, respectively), further reflected by a significantly different Fisher alpha values 2.15 ± 1.18 at day, and 2.84 ± 1.34 at night hours. Total (inclusive day/night) mean of canopy dwelling species richness  for the three canopy size groups (S, M, and L), calculated for day and night together, revealed twice as high richness in large colonies than in small colonies. Rare species were mostly found on larger canopies, with only one rare species, the flattened shrimp Harpiliopsis depressa recorded in a medium-sized canopy. Similar results were recorded for richness vs. canopy Strahler number, with almost 5 x higher richness in canopy Strahler number 6 as compared to canopy Strahler number 2 and rare species were found on more structurally complex canopy Strahler number 4 and above.

Species Distribution in Canopy Compartments- The most common crustaceans living between the canopy branches were the brachyurans Trapezia cymodoce and Trapezia digitalis. At night T. cymodoce was recorded in 105/114S. pistillata canopies studied, with up to 5 large specimen/canopy, and up to 7 (2 large,3 medium and 2 small) individuals per canopy. T. cymodoce and T. digitalis were sympatric,found to reside side by side in the same canopies, and only 2/55 canopies with T. digitalis
did not harbor T. cymodoce. The maximum number of both species residing in the same
canopy was 9 (6 canopies). Although most T. digitalis specimen belong to the medium
size class (77% day, 62% night), in most of the observations, they sympatrically shared thecanopy with the large body size T. cymodoce. Colonies of canopy Strahler number 2 had onlyone small or medium body size T. cymodoce specimen/colony. In addition, the different body size populations showed different distribution patterns in the canopy compartments at day and night (Figure 3). During the day, both species commonly dwelled on the canopy bases with dominant numbers for the larger-sized individuals. At night, small individuals were found primarily (87% for T. cymodoce, and 100% for T. digitalis) in the canopy’s upper compartment (‘up’), usually above the first bifurcation section (Figure 3), while most medium size crabs ( were recorded at the ‘middle’ compartment (82% for T. cymodoce, and 83% for T.digitalis), and the large size crabs were found between the canopy ‘base’ to the ‘middle’ compartment (Figure 3).

In contrast to the Trapezia species, the distribution of hermit crabs (Figure 3) did not significantly differ between day and night. Although small body-sized (shell diameter < 1cm) individuals were found with higher proportions (62%) at the canopy lower compartments (‘understory’ to ‘base’), the larger individuals (medium 3-1cm and large > 3cm,shell diameter) were more prevalent at the ‘middle’ and ‘up’ compartments (85%). Overall, the larger individuals were not prevalent in the canopy (11 out of total 212 day and nightindividuals) and significant differences were found only between the small to the medium group sizes. Shifts in compartments’ positions between day and night were further documented forother species. The crustacean Alpheus lottini, and the fish Paragobiodonechinocephalus, which were hardly documented during day surveys (1 and 7 colonies, respectively), were always associated with the canopy base, yet, during nighttime they were recorded in the canopy middle compartments (8 and 22 colonies, respectively). The radial shield of the brittle stars Ophiocomaand Ophiactis species were found during the dayat the inner canopy compartments (base) and their arms folded or stretched throughout the inside spaces of all canopy compartments. During night hours, their arms extended outside the canopy volume, beyond the top most compartment or on the ground awayfrom the understory compartment. Similarly, specimen of the fish Sebastapistescyanostigma were commonly found during the day inside the canopy, usually from the base to the middle canopy, while at night found foraging primarily from the top most compartment towards the understory. In contrast, specimen of the fish Pseudochromisolivaceus were found swimming through all canopy compartments during the day hours and, at night, found at the base to middle compartments, never out of the canopy space (Figure 4).While the sessile species (n = 11) were found in all canopy compartments, some (n = 4) predominantly dwelled in specific parts. For example, more than 50% of the boring bivalve Leiosolenuslessepsianus specimen were found at the bifurcation points of branches and thegall crabs were found at the branch tips. Specimen of the tube building annelid were foundat all canopy compartments, nevertheless, specimen of genus Sabellastartewere never found projecting out of the canopy space unlike specimen of the genus Spirobranchus (Figure 6).

In summary, this study revealed canopy-dwelling macro species in five major canopy compartmentations of the coral species S. pistillata from the Gulf of Eilat. For the first time, the Strahler order number of branches was considered as the key spatial differentiation factor. The fauna recorded included 11 sessile and 21 mobile species that dwell in the canopy spaces. Canopies with higher Strahler numbers had higher diversity and abundance of dwellers. Most importantly, coral-dwelling species showed compartmental preference and mobile species exhibited temporal variation in diversity and in compartment allocation between day and night, and between size distributions. This new approach provides us with a different strategy to analyze the complex coral canopy structural morphologies and landscape in relation to residing macro-biota within designed compartments. Weighting the canopy’s niche types in S. pistillata allows an improved analysis and easy quantification of the coral canopy complexity under field conditions. It further resulted in the documentation of a climax dwelling assemblages as the coral reaches complexity of Strahler number 3 at day time, and 5–6 at night time. All the above are new documentations for novel approaches in the research of marine animal forests. The employment of the Strahler ordering may further response to long-standing unresolved questions, such ashow similar are the species richness and abundance of coral dwellers between different colonial sizes and between different coral species of the same size, all revealing the benefits of using this new analysis of coral canopy’s complexity. Further, the canopy Strahler associated animal distribution established for S. pistillata’s residing biota, indicates fauna biodiversity and dispersal that are tightly associated with morphometric complexity, beyond the classical analyses that focus on the Stylophora’scolony pattern formation rules and on the growth rules as studied for other hermatypic corals. the branch ordering hierarchy adds to the understanding of the functional properties of the coral canopies and is revealed here as a major component for evaluating special distributions and biodiversity of canopy-dwelling species in branching corals, allowing day/night shifts following other biological traits of residing organisms (like foodforaging) and group size niches within the spaces created by coral canopies. 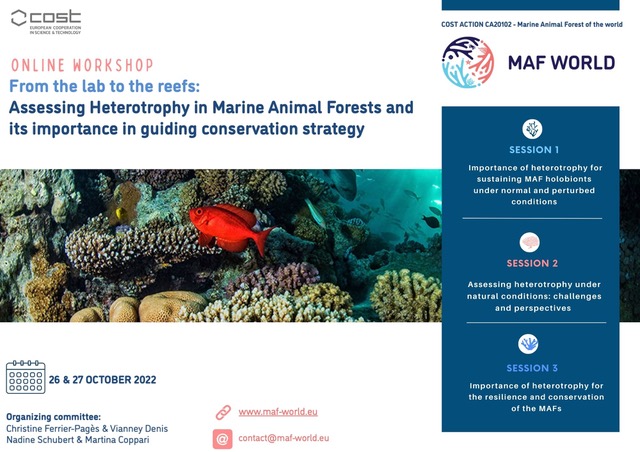 Heterotrophy for MAF resilience and conservation

Marine Animal Forests (MAFs) are built by many organisms that depend either partially or entirely on the heterotrophic uptake of particulate and dissolved nutrients for survival. 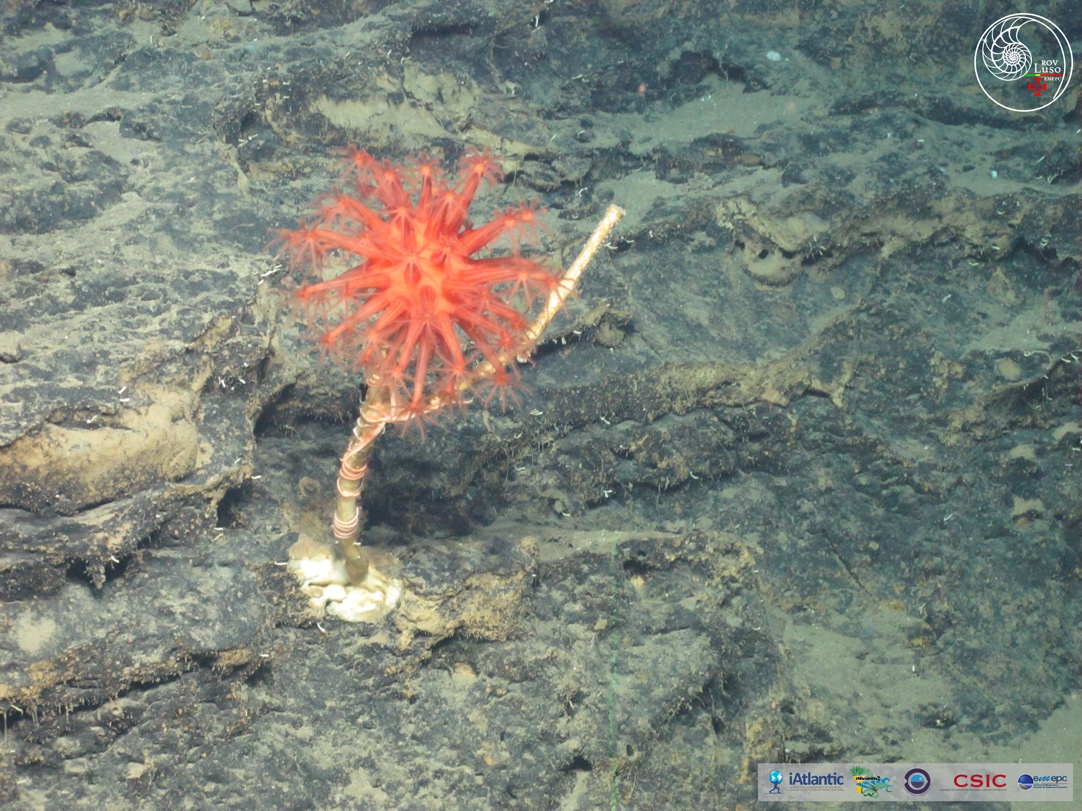 Taxonomical knowledge is the basis for many biological and ecological studies. However, even if this is a fact, the reality shows that the number of taxonomists working with megabenthic fauna is decreasingand few young researchers are involved in this fundamental research field. 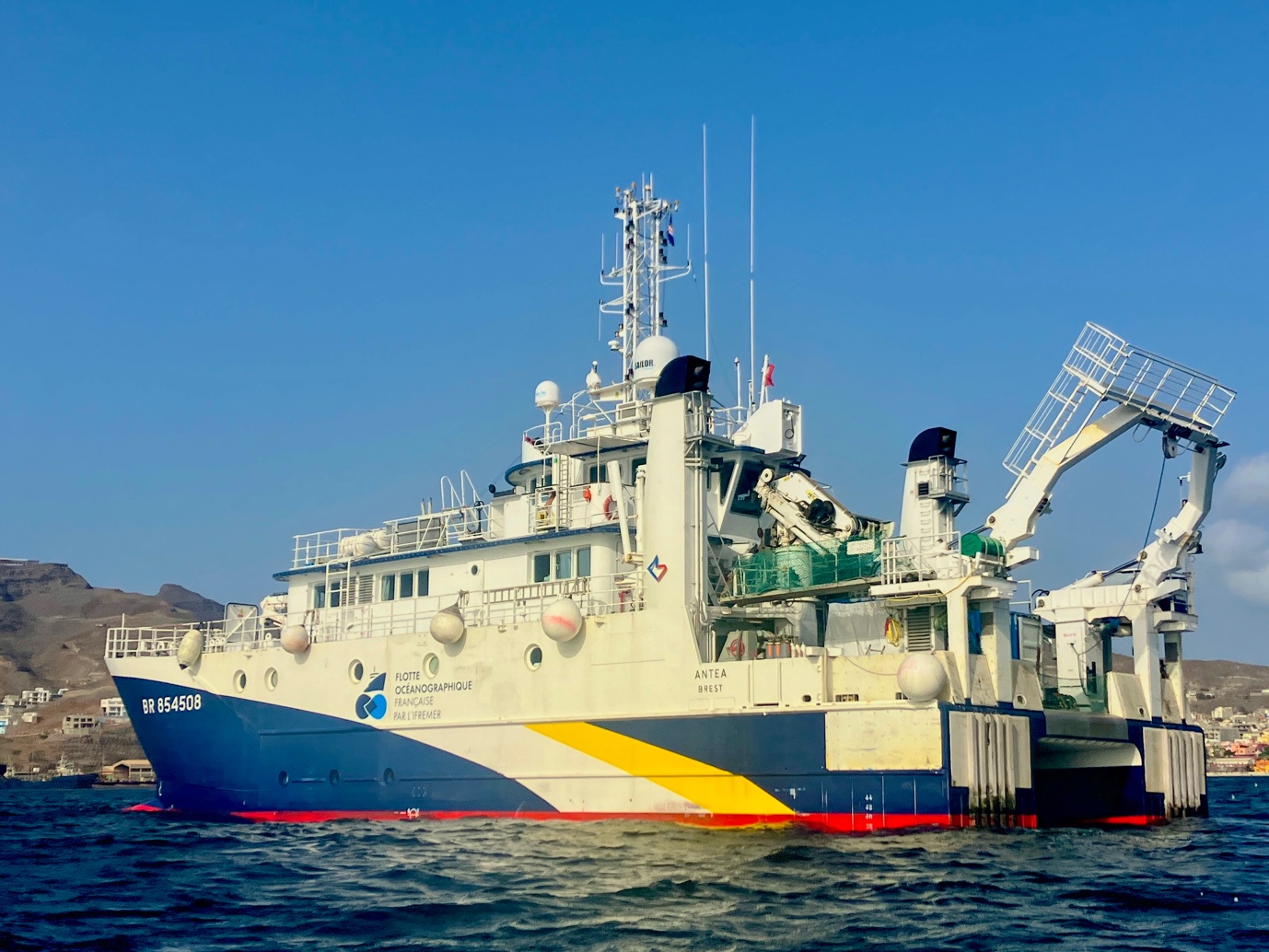 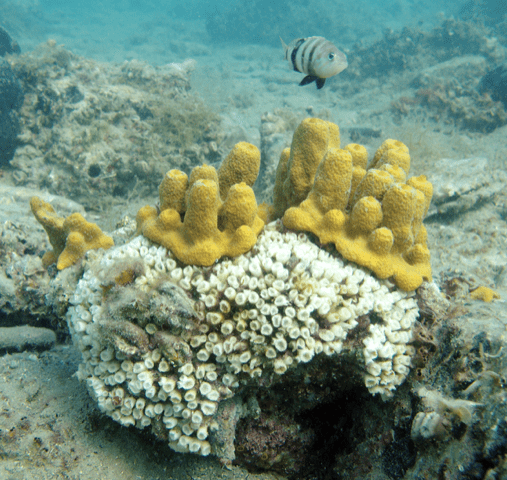 The Mediterranean pillow coral: many threats impacting its survival

The Mediterranean pillow coral - Cladocora caespitosa (Linnaeus, 1767), is the only native colonial and obligate zooxanthellate coral in the Mediterranean Sea, listed as an endangered species on the IUCN Red List. 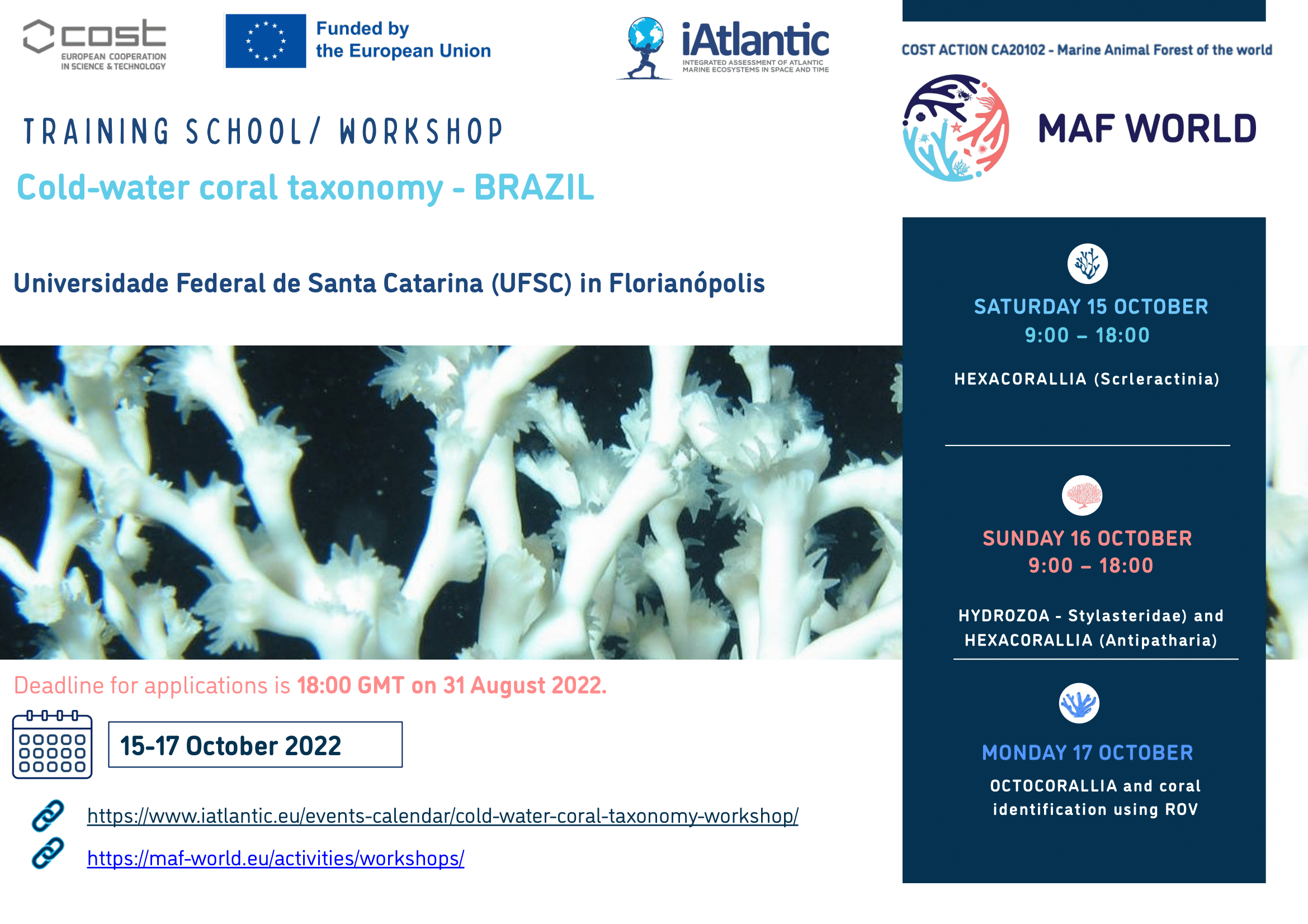 For MAF-WORLD COST Action 20102, it is a pleasure to announce the partnership in the Cold-Water Coral Taxonomy training school/workshop organised by iAtlantic that will be held in Brazil at the Universidade Federal de Santa Catarina (UFSC) in Florianópolis, on 15-17 October 2022.

For MAF-WORLD COST Action 20102, it is a pleasure to announce the partnership in the Cold-Water Coral Taxonomy training school/workshop organised by iAtlanticthat will be held in Brazil from 15th to 17th of October, which is now open for registration.
View All